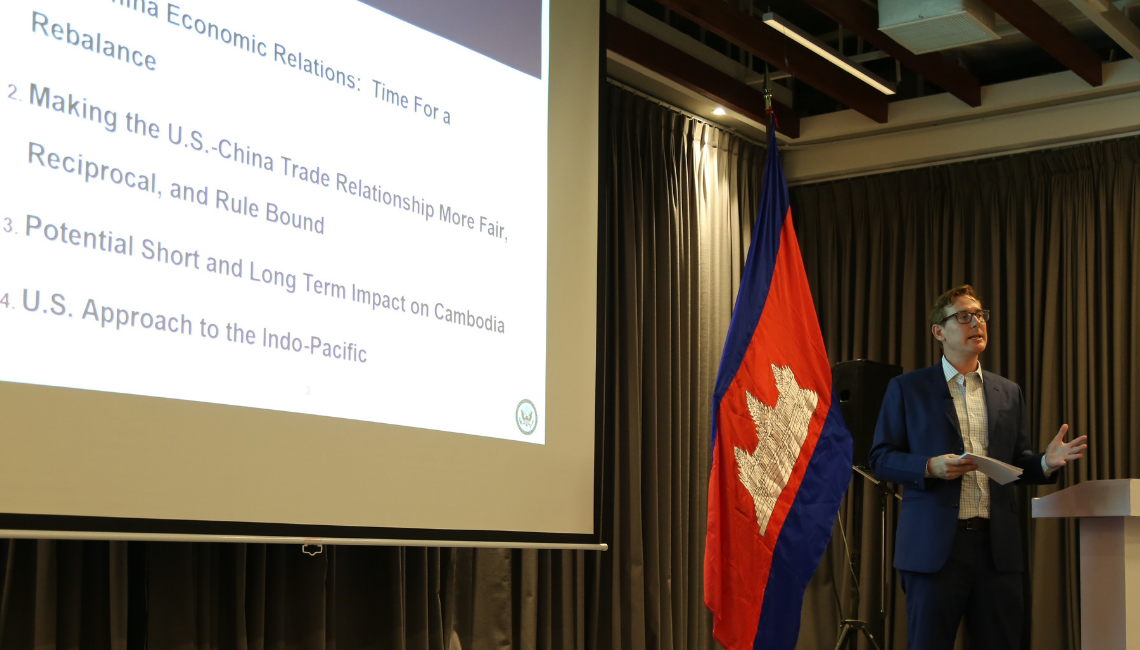 Thank you very much for coming tonight. I can see we have a great, interested audience, and a top notch panel ready for an evening of thoughtful, heady discussion. I want to thank first the American Chamber of Commerce. I also want to thank our very distinguished panelists, all experts in economic and trade policy.

We wanted to use this discussion to explain our perspective about something that has been in the news a lot lately, though, I admit, has not been covered with much context or factual background.  When you read op-eds touting China’s commitment to free trade and competition, you know things have been turned upside down.  The ongoing trade discussions between the U.S. and China are an important and necessary development, one that has significant implications for our relationships, and for trade and economic growth in Asia and elsewhere.

For over 70 years, the U.S. has been a global leader for free, fair, and reciprocal trade. We have one of the most open economies in the world, and, through our consumers, have fueled a rise in investment, jobs, and living standards throughout the world. However, some countries have taken advantage of our openness and not provided the same opportunities for American business. This administration is determined to re-balance those relationships so that they provide greater mutual benefits. One such country is China.

Over the past several decades, especially since 2007, China’s economy has accelerated rapidly – on a relative and absolute scale. Some of this is due to the secular impact of Chinese growth, and some is due to slowdowns in West related to 2008-09 recession.

What China has achieved since it began its economic reform and opening is truly remarkable.  The country has lifted over 700 million people out of poverty, which accounts for over 70 percent of global poverty reduction over the past four decades. However, it is important to remember, despite all the talk of the economic decline of the U.S., the United States has maintained significant, strong growth over this time as well and is still by a large margin the world’s largest economy.

The U.S. economy remains resilient, innovative, and the world leader in most areas, and our commitment to an open, transparent, rules and market-based approach to economic growth will insure that we will remain so.

Much of China’s growth was enabled by its trading relationship with the U.S. Joining the WTO, and gaining access to the free trade, rules-based system, was an irreversible onramp to a high-growth economy.

China is now the United States’ largest absolute trading partner and third largest export market. U.S. exports of Goods and Services to China support almost one million jobs.  In 2018, total U.S. trade with foreign countries was $5.6 trillion, of which about 12 percent was U.S.-China trade.  The U.S. also played a significant role in building modern China through this investment – since 1990, the United States has invested nearly $260 billion in China

However, the dynamics looks very different from the perspective of the balance of trade.  The U.S. goods trade deficit with China was $419 billion in 2018, a 20 percent increase from 2013.

It is an undeniable fact that the U.S., and many other countries, have moved manufacturing operations to China to take advantage of cheaper labor, economies of scale, and other supply chain factors. This has had tremendous benefits for consumers worldwide. But the persistence of this trade balance has other structural and policy causes as well.

Over the past few decades, China has pursued a conscious industrial strategy that has favored Chinese companies – many of them controlled by the government – over foreign ones, ignored WTO obligations, failed to protect foreign intellectual property, and forced the transfer of, or stolen, technology.  This has helped Chinese companies gain advantages over foreign ones, an approach China is now exporting to other countries.  The U.S. and other countries have asked China to change, with little success – until now.

A list of Chinese actions and behavior documented in a 2018 study conducted by the U.S. Trade Representative found that the U.S. and European chambers of commerce estimate that a fifth their members have been pressured into technology transfer by the Chinese; in high-tech sectors, that number is more than 40 percent.

For us, this effort is about fairness, it’s about reciprocity, and it’s about an open and transparent rules-based system. Chinese actions are not directed only towards the United States, but to all foreign investors. There is a global consensus that China needs to change its practices.

By any objective measure, the United States is one of the world’s freest and most open economies. We are committed to using all available tools to level the playing field for U.S. businesses, and persuade China to make real changes at the negotiating table. We have taken a number of steps so far to demonstrate our seriousness.

But let’s be clear: the United States is not opposed to all of China’s economic activities; we do not seek to “contain” China. We believe a return to the path of reform will improve U.S.-China relations, enhance China’s standing in the world, and ultimately serve the interests of the Chinese people.

Joining the WTO requires nations to follow a set of rules.  However, since China joined the WTO in 2001, it has not played by the rules. You see this in resulting trade imbalances and the use of non-market practices to give China advantages.  Our goals are to change this dynamic and rebalance the relationship through creating a level playing field in China, and enforcing adherence to the rules agreed to by China.

For Cambodia, are clear opportunities, such as increased investment as companies re-think their supply chains, or increased Cambodian exports.

But there are also risks. Companies may seek to avoid tariffs and pass through products to the United States via transshipment.  U.S. Customs has already investigated and fined a number of Chinese companies evading tariffs in the U.S. by routing goods through Cambodia.

Cambodia’s strong economic growth over past 20 years very impressive, something Cambodians are rightly proud of.  This was due to two important factors: Pro-growth, open economic policies of the government and hard work by the Cambodian people, and contributions from a diverse range of partners, including US, EU, Japan, Korea, China, and ASEAN neighbors, providing trade, investment, and development assistance.

In the last few years, however, Cambodia’s orientation has undergone a dramatic shift. Instead of a diverse range of partners, China is now the dominant player in all the major elements of Cambodia’s economic growth.

Although China was always a leading contributor to Cambodia’s growth, it is overwhelmingly dominant in every sector.

As for the trade relationship, Cambodia is showing some of the same kind of imbalances that the U.S. has with China. China’s trade relationship with Cambodia is heavily skewed in China’s favor; 87% of trade are Chinese imports – much of it is raw materials for garments and construction. U.S., or for that matter, EU, driven investment in key export industries produces vast numbers of jobs. For example, GSP preferences granted to Cambodia in 2016 for travel goods created a $500 million industry in two years and supported thousands of Cambodian jobs.

Why should this matter? After all, with a growing economy, Cambodia should be able to sustain its growth model, even if one player has a much bigger relative and absolute role. And maybe it can.

But there’s a few reasons to be concerned. First, if China’s economy slows, so will Cambodia’s. That’s a fact. The economies are tethered.  Second, with dependence comes vulnerability.  China has shown in other contexts it will use its economic might to compel countries to concede diplomatically or politically on issues that are important to China. Moreover, with its state run companies taking on a bigger role in the economy, you can’t distinguish between the private sector and the government. Third, there are many, very visible negative externalities that come with significant Chinese investments, namely the lack of transparency or accountability, the rise of corruption, and the export of Chinese vice.  Fourth, Chinese investment is invariably oriented towards the Chinese government’s interest.

The U.S. offers something different, something that we think is valuable to Cambodia and the other countries in Asia. And there I’d like to turn to our approach to the Indo-Pacific.

You can see that the basis of our Indo-Pacific Strategy is to pursue a Free, Open, and Secure region. But let me focus on the major economic components.  We seek to partner with all nations that respect national sovereignty, fair and reciprocal trade, and the rule of law.  We believe the private sector should play a leading role in driving economic growth, and that countries should have open, transparent, and real market competition.

We welcome contributions by China to regional development, so long as they adhere to high standards, including in areas such as transparency, rule of law, and sustainable financing.

When it comes to deals in Cambodia or anywhere else, it’s important for people to have the right and ability to review these deals to make sure everyone benefits and not just a few.  Chinese investment can be beneficial, but these deals need scrutiny and close supervision to make sure the benefits go to the country, not the dealmakers.  That’s the only way we can ensure that Cambodia is getting the best deal.

Overall, I would argue that Cambodia has benefitted much from having a diverse range of partners to contribute to its development. It still can. I think that there can be room for all everyone in Cambodia.  And I know that’s what the Cambodian people want, too.