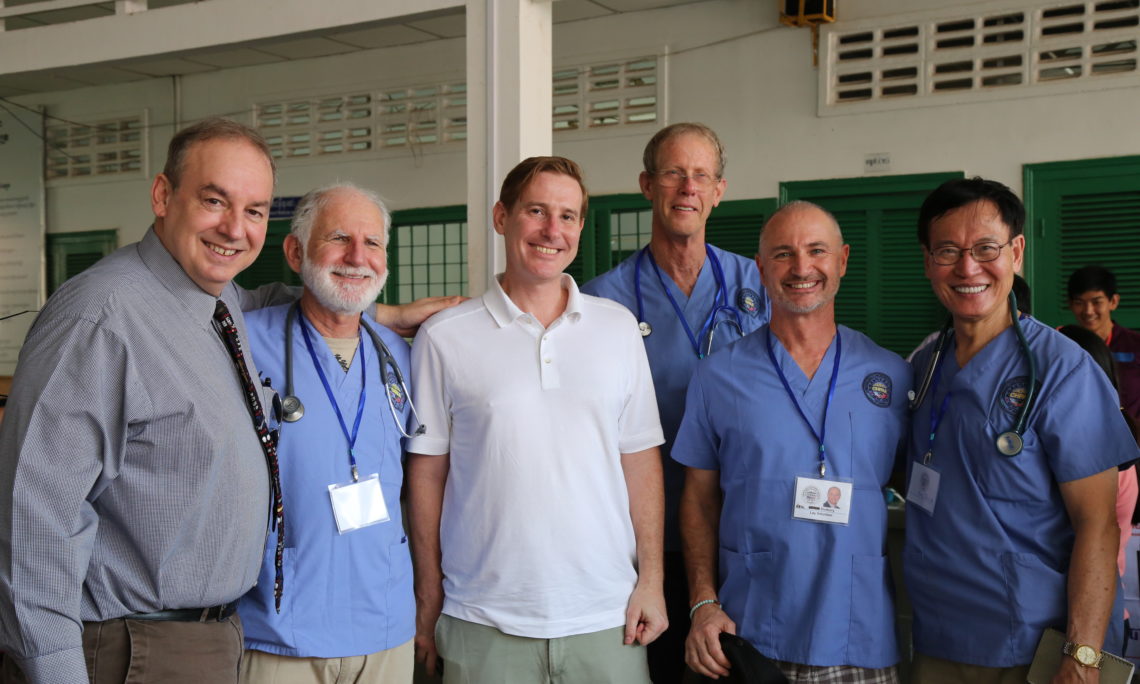 This week, I had the honor of joining the Chargé d’Affaires Michael Newbill, as he traveled to Kampong Thom Province to witness, first-hand the incredible care by a team of American medical professionals from the Cambodian Health Professionals Association of America (CHPAA).

As we arrived early in the morning at the local hospital in Baray Santuk, there were over 1,000 patients waiting to be seen.  Some came as early as two a.m. to join the long line with their families, so as not to miss out on the free, high quality health care. This amazing team of healthcare professionals saw at least 1,000 patients a day, every day this week.

CHPAA is a non-profit organization that provides free medical, dental, and surgical services to underserved people of Cambodia, as well as much needed health education. The team is currently mid-way through their ninth medical mission to Cambodia since being founded in 2001 by Dr. Song Tan.

Dr. Tan is a Board Certified Pediatrician in private practice since the 80’s in Long Beach, California. After surviving the Khmer Rouge genocidal regime, in forced labor camps, he embarked on a perilous journey by foot to escape to the Cambodian-Thai border’s refugee camps.

After living in the Refugee Camps in Thailand for over a year, and almost six-year-long ordeal, he was at last resettled in a new life in San Francisco, where he worked as a health worker and interpreter. He went on to complete his Pediatric Residency Training at the University of Hawai’i John A. Burns School of Medicine/Kapiolani Medical Center for Women and Children in Honolulu, Hawai’i.

During his current Medical Mission to Cambodia, he is accompanied by a virtual army of healthcare professionals! Two hundred Surgeons, Physicians, Dentists, Physician Assistants, Nurse Practitioners, Nurses, and lay volunteers and interpreters have joined Dr. Tan on this noble mission. And of course the hard work of Dr. Teri Tan, CHPAA Mission Administrator, deserves much of the credit for the success of this incredible mission.

Later that morning, Dr. Tan told us that the team had only begun setting up on Sunday when a 37-year-old man arrived at the hospital in the back of a police pick-up. He had been in a horrible motor bike accident and had suffered fractures to both of his legs, one arm and a closed head injury. The team immediately jumped into action, stabilizing all his injuries, and securing a breathing tube as the young man was unconscious and had stopped breathing. Had the team not been there, the patient would have surely died.

CHPAA’s mission reflects the American values of public service, volunteerism, and giving back to the community.  In Baray Santuk, I saw that these values translate into vital action. I was honored to witness the incredible difference – in many cases, the difference between life and death – CHPAA is making for the people of Cambodia.