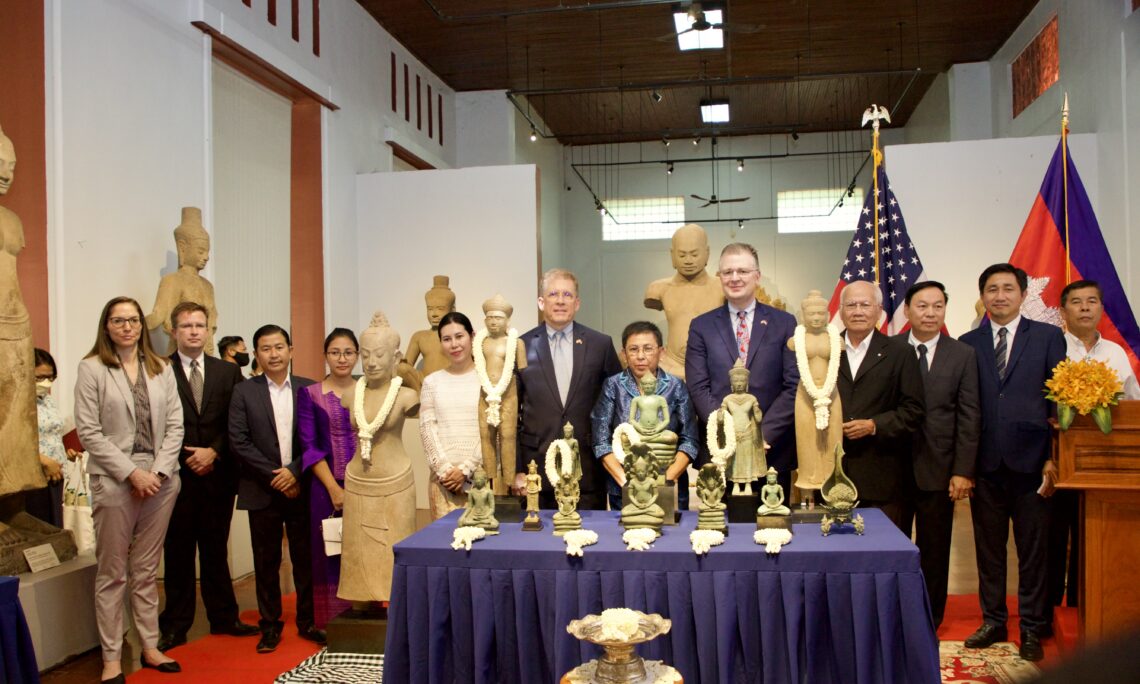 Assistant Secretary Kritenbrink highlighted a memorandum of understanding between the government of Cambodia and the United States, which has solidified U.S.-Cambodia cultural cooperation, facilitated the return of over 100 priceless antiquities, and built the capacity of Cambodians working on cultural heritage preservation. Kritenbrink also praised the joint efforts of the U.S. Department of Justice and law enforcement, Manhattan District Attorney, Homeland Security Investigations, Ministry of Culture and Fine Arts, and U.S. Embassy that led to the return of 27 pieces.

“Today’s ceremony is a testament to the strong relationship between the United States and the Ministry of Culture and Fine Arts,” Kritenbrink said. “U.S. government initiatives, such as the Ambassadors Fund for Cultural Preservation, demonstrate our longstanding support for the restoration of historic sites of cultural significance for Cambodia.”

At the ceremony, Ambassador Murphy announced a new U.S. government grant through the Ambassadors Fund for Cultural Preservation of $360,800 to support the restoration of Preah Vihear temple. This is in addition to over $406,000 already provided by the U.S. government for the preservation of the historic temple in northern Cambodia.

“The United States is proud of its contribution to Cambodia’s cultural heritage preservation efforts and to our joint efforts to repatriate invaluable artifacts from the U.S. back to Cambodia,” Ambassador Murphy said.

Minister of Culture and Fine Arts Dr. Phoeurng Sackona concluded the ceremony stating “we sincerely appreciate the contributions of the U.S. Government, both in time and resources, in fighting the illicit trafficking of cultural properties.  We look forward to further our cooperation in our investigations and efforts, training and exchange of information and expertise as we recover our national treasures.”

The United States has provided over $5 million to the Royal Government of Cambodia since 2001 for cultural preservation efforts, including over $3.5 million to conserve the Phnom Bakheng temple in Siem Reap and to support to the Toul Sleng Museum.