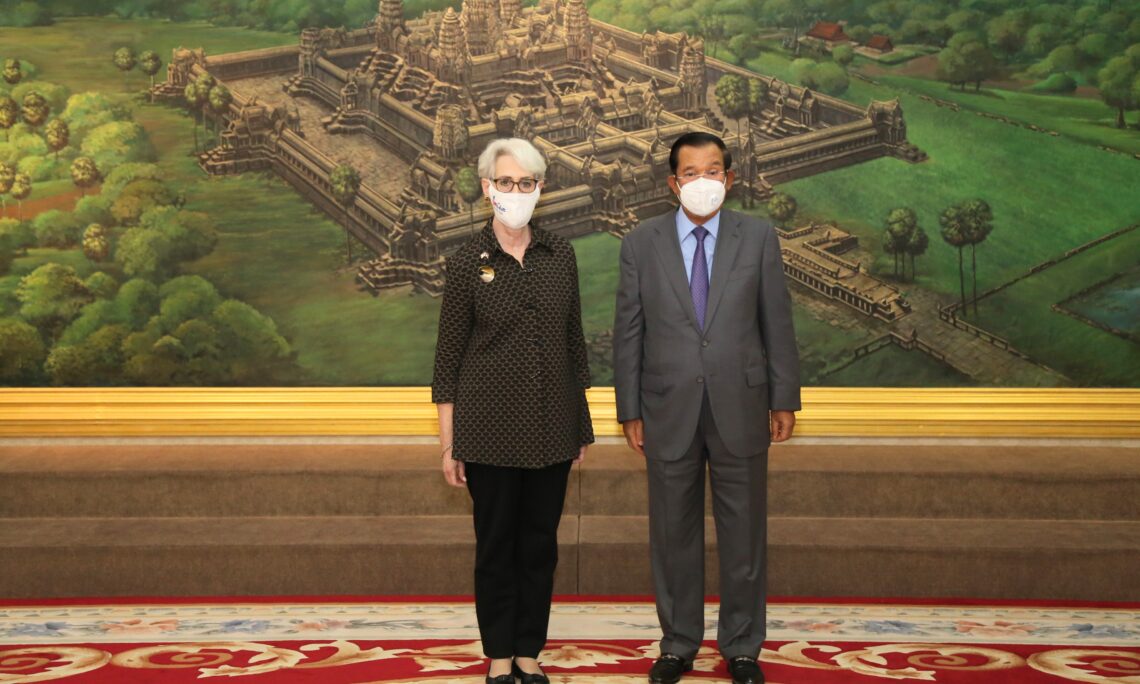 OFFICE OF THE SPOKESPERSON

Deputy Secretary of State Wendy Sherman led a delegation to Phnom Penh on Tuesday, June 1.  In a meeting with Prime Minister Hun Sen, Deputy Secretary Sherman stressed the U.S. commitment to the Cambodian people and recalled the important role the United States and other partners played in brokering the 1991 Paris Peace Agreements, which ended decades of civil war.  She noted the more than $3 billion in assistance the United States has provided since then to support the country’s development and generous U.S. trade benefits that have fueled economic growth in the Kingdom.

Deputy Secretary Sherman highlighted U.S. support for Cambodia during the pandemic, including $11 million to help address economic and health challenges along with expert advice from U.S. health agencies present in Cambodia.  She also noted productive cooperation with Cambodia on implementation of UN sanctions on the DPRK, child protection, UN peacekeeping, POW/MIA accounting, humanitarian demining, public health and education, and other shared interests.

Deputy Secretary Sherman expressed serious concerns about the PRC’s military presence and construction of facilities at Ream Naval Base on the Gulf of Thailand.  She sought clarification on the demolition of two U.S.-funded buildings at Ream without notification or explanation and observed that a PRC military base in Cambodia would undermine its sovereignty, threaten regional security, and negatively impact U.S.-Cambodia relations.  The Deputy urged Cambodia’s leadership to maintain an independent and balanced foreign policy, in the best interests of the Cambodian people.

Deputy Secretary Sherman emphasized the importance of human rights and the protection of fundamental freedoms as integral to our bilateral relationship.  She urged the Cambodian government to abide by its international and domestic human rights commitments and to ensure the protection of worker rights.  She called on authorities to promptly drop the politically motivated charges against members of the political opposition, journalists, and activists.  Deputy Secretary Sherman pressed the government to reopen civic and political space in advance of the 2022 commune and 2023 national elections.

While in Cambodia, Deputy Secretary Sherman also held meetings with representatives from civil society as well as leader of the Cambodia National Rescue Party Kem Sokha to discuss issues of shared importance with the United States, including ensuring a peaceful, prosperous, sovereign, and democratic future for Cambodia.

Deputy Secretary Sherman assured the Prime Minister that the United States intends to work with Cambodia in its role as 2022 ASEAN Chair and help ensure it can play a constructive role in addressing critical regional political and security challenges, including in North Korea, the South China Sea, and the Mekong region.  She also called on Cambodia, as a member of ASEAN, to hold the Burmese military regime accountable to ASEAN’s Five-Point Consensus that seeks to address the ongoing crisis in Burma.  The Deputy expressed appreciation for Cambodia’s work as 2021 co-chair of the Mekong-U.S. Partnership.