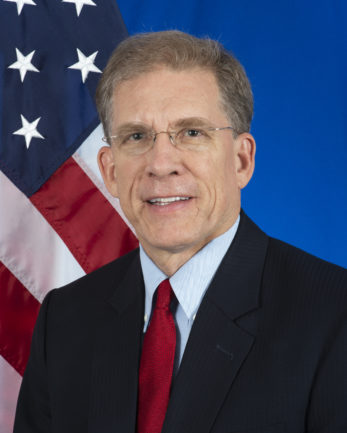 Since joining the Foreign Service in 1992, he has also completed diplomatic assignments abroad in Burma (Myanmar), China, Iraq, Guinea, and Mali. His prior Washington service at the Department of State includes Special Representative for Burma (Acting), Director and Deputy Director of the Office for Mainland Southeast Asia, political advisor for the Haiti Working Group, and desk officer for Burma and Laos.

Ambassador Murphy was a Peace Corps volunteer in Cameroon. He received an M.A. from The Johns Hopkins University (SAIS), an M.S. from the National War College (distinguished graduate), and a B.A. from the University of Vermont. He also studied at the Institut Européen des Hautes Études Internationales in Nice, France.

Prior to joining the Foreign Service, Ambassador Murphy was a resource economist for the World Wildlife Fund and a policy analyst for the Overseas Development Council. His foreign languages include French, Burmese, Cantonese, and Spanish. He and his wife Kathleen have a son and two daughters.

Jum reap suo!
I’m thrilled to be the new Ambassador at @USEmbPhnomPenh. Learn a bit about me and my hopes for my time in Cambodia in this video. I’m looking forward to joining the Kingdom very soon. #FirstTweet pic.twitter.com/uADxAuFirE