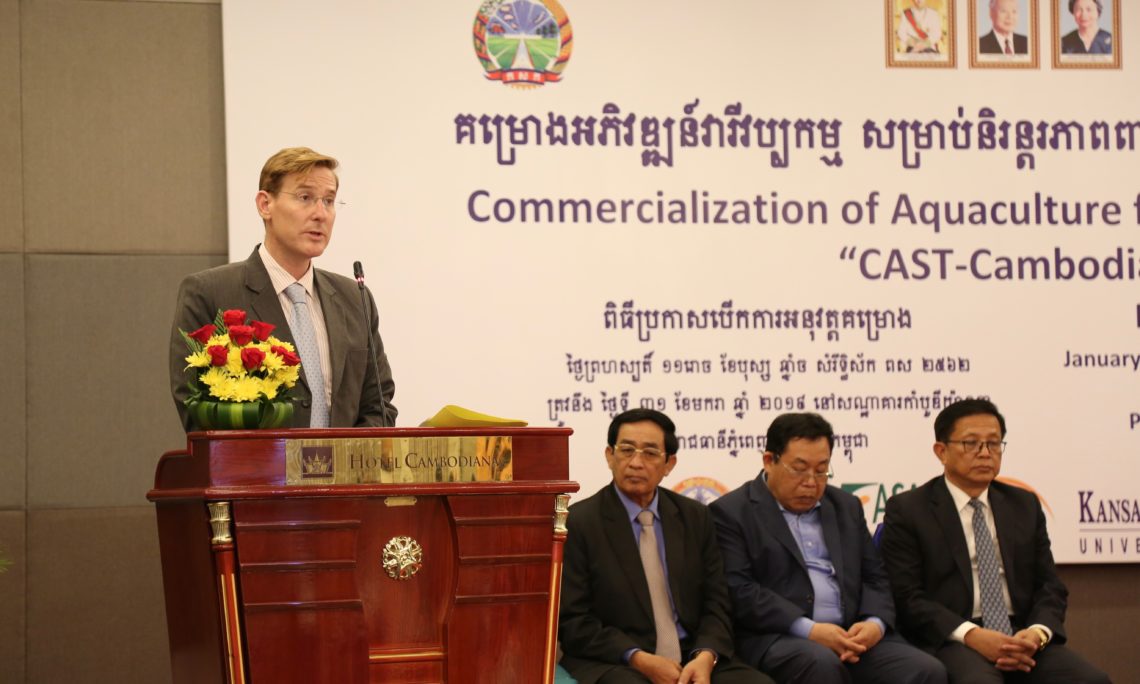 The United States supports Cambodia’s agriculture industry in many areas. Our U.S. Agency for International Development, for instance, is helping Cambodia with SPS standards to improve its mango and cashew sectors, and is providing technical assistance on strategic planning and a contract farming law, among many other food and agriculture projects.

The CAST project is unique because it uses an abundant resource – soy – and utilizes it as a feedstock for Cambodia’s growing aquaculture industry.

Aquaculture is one of Cambodia’s most important sectors, with production growing by 17% in 2017 alone, to reach over 200,000 tons.

The CAST project’s goal of increasing aquaculture production is in line with the Ministry’s (MAFF’s) policies and will improve Cambodian livelihoods. Importantly, it will also reduce pressure on wild capture, which currently accounts for 76 percent of total fishery production.

I was born in Illinois, which is in the Midwest – a part of America where there are fields of soybeans and corn as far as the eye can see. It is truly a beautiful sight, and an iconic part of America’s heartland. In fact, as a little kid, I remember losing my kites in the soybean fields.

I know we have some American farmers here today, from Illinois and from elsewhere, who are naturally pleased that this project means increased sales of U.S soybean to Cambodia.

But, more important than increased trade, this project brings the prospect of supporting Cambodia’s long-term food security by increasing the resilience of its aquaculture industry.

Cambodian’s eat a lot of fish. Research shows that fish make up 76% of the animal protein consumed by the average Cambodian, making Cambodians the largest consumers of freshwater fish per capital in the world.

That is why the CAST project is so significant – because it will strengthen Cambodia’s food security by developing Cambodia’s aquaculture industry all along the value chain.

The result will be increased production of a locally-raised, high-quality protein source – one that Cambodians enjoy eating.

By connecting trade and development, CAST will support sustainable and long-term growth in aquaculture and will link U.S. and Cambodian producers.

It will promote food security and economic growth in Cambodia and build ties between our two countries.

And, since there are some American farmers here that represent American agricultural businesses, I just want to say just a few words about American business.

As Cambodia continues to grow, its choices for potential business partners will grow—including in the agricultural sector. I would encourage you all to consider who may be the best partner for you now, and for the long-term.

As you may remember, this project launch follows a successful U.S. agricultural trade mission to Cambodia in September of last year, where U.S. agricultural companies demonstrated a keen interest in expanding their presence in Cambodia.American businesses are different from many companies that operate in the region because they represent American values, and bring with them quality products with high standards, transparency, and an adherence to the law.

Teaming up with the United States on projects such as these is a win for Cambodia because we value sustainable growth and promoting fair and reciprocal trade.

To wrap up, I’d like to say thank you to the American Soybean Association (ASA), and the leaders of its development program, the World Initiative for Soy in Human Health (WISHH) for traveling to Cambodia for this project launch. In particular, I would like to recognize:

I’d also like to recognize the numerous partners who will are supporting this project: the U.S. Soybean Export Council, Kansas State University, Auburn University, World Vision, the Royal University of Agriculture, and the University of Battambang.

Once again, I would like to thank everyone for their support. I am looking forward to hearing about the success of the CAST project in the coming months and years.