Home Home | News & Events | Remarks by Chargé D’Affaires Michael Newbill at the “Regional Conference Whither “The Indo-Pacific Strategy?” of CICP 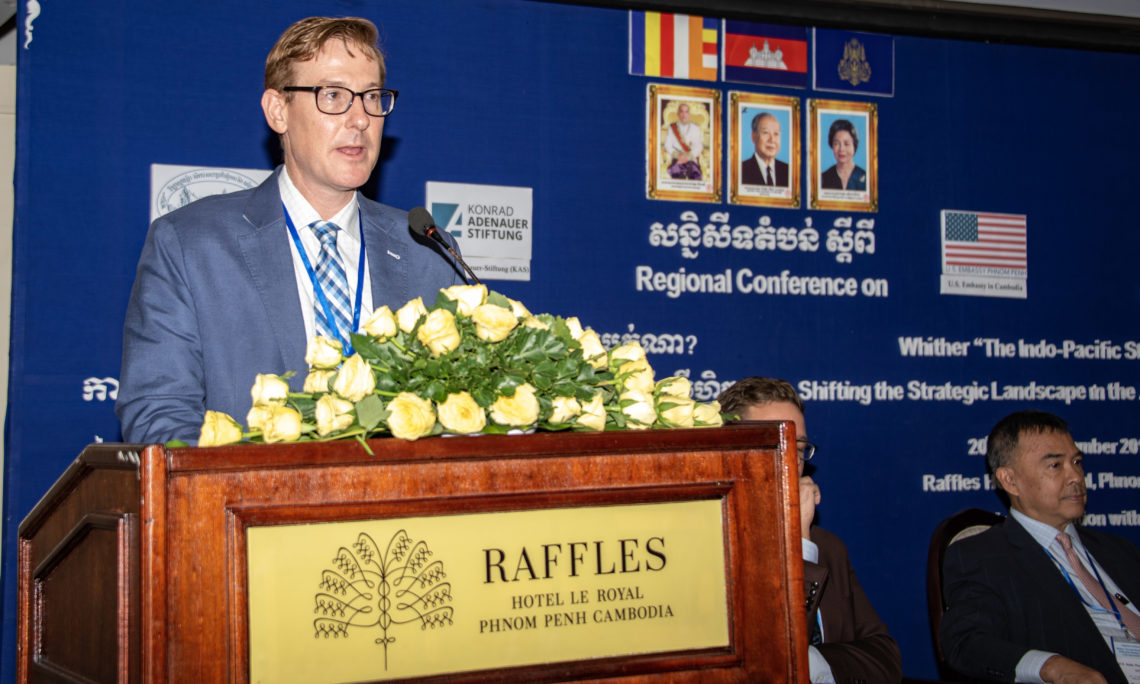 Chargé D'Affaires Michael Newbill delivered his remarks at the "Regional Conference Whither “The Indo-Pacific Strategy?” of CICP on September 20, 2018.

First, I want to welcome all of the participants who have come from other countries to attend this conference.

And of course, I especially want to thank Ambassador Pou Sothirak for his leadership and vision in pulling this conference together. It is an extremely timely topic, and we are grateful to the Cambodian Institute for Cooperation and Peace (CICP) for organizing this forum.  I’d also like to thank the South Asia & Southeast Asia International Logistics Research Institute (SSILR) in Kunming, China and Konrad-Adenauer-Stiftung (KAS) Cambodia for helping to sponsor this forum.

This is the right time and the place for this conference:  Cambodia is not only at the geographic center of the Indo-Pacific, but it is also in the heart of ASEAN. As Secretary Pompeo’s visit to the region last month demonstrated, the United States sees ASEAN at the center of our engagement in the region.

We have seen lots of articles questioning Cambodia’s foreign policy direction lately.  Debate on these issues is important.  This is a good role for CICP to play in bringing these speakers and participants together – and of course the United States Embassy is glad to support a vigorous exchange of views on these important topics.

As part of our Embassy’s support for this conference, we have invited two well-known and respected U.S. speakers to participate.

The first is Brad Glosserman, who is deputy director of the Center for Rule Making Strategies at Tama University in Tokyo, Japan. Brad will talk in just a few minutes about security mega-trends in the Indo-Pacific.

As you may know, our military recently renamed our Pacific Command the “Indo-Pacific Command” to recognize the Trump Administration’s vision for the region. So this geographic change in the way the United States—and many other nations—views the region, is itself a security mega-trend.

Charles Edel, who visited Cambodia in May and met with many of you, will talk about how the United States envisions a “free and open” Indo-Pacific. Dr. Edel is a senior fellow and visiting scholar at the United States Studies Centre in Sydney, Australia.  Previously, Dr. Edel served on the U.S. Secretary of State’s policy planning staff from 2015 to 2017, so he is familiar with how the State Department works and how foreign policy is made.

Now, I know that many of you want to hear about how this “Free and Open Indo-Pacific” Strategy relates to competition among major powers. But since we represent a major power, I think it will be more interesting to hear from others on this topic.

The other major power in question is, presumably, China. As you know, the United States has a very broad relationship with China on a vast range of issues.  Our vision for the Indo-Pacific excludes no nation.  We welcome contributions by China to regional development, so long as they adhere to high standards, including in areas such as transparency, rule of law, and sustainable financing. I know speakers will be covering this important terrain throughout the next two days.

I’ve mentioned this term “Free and Open Indo-Pacific” a couple times already, but for those of you who might not be familiar with our terminology, I want to spend a minute talking about one specific element of this language, and what it means for our foreign policy.

When we say a “free” Indo-Pacific, it means we want every nation to be able to protect their sovereignty from coercion by other countries. By “open” we mean unrestricted lines of shipping, transportation, and communications that are truly the lifeblood of the region, and vital to the growing prosperity of the world.

We also mean “free and open” in relation to governance and liberty within a country. That means being able to maintain an independent foreign policy that serves the interests of all the people in a country, not just a few.  For this to happen, people must have a voice in the direction of their country, and the decisions leaders make. And those decisions need to be transparent so people can understand whether they are really in the interests of the country.

Unfortunately, there are a number of recent examples when leaders make decisions behind closed doors, and those decisions don’t turn out well for the people. We’ve seen countries take on huge loans from construction and infrastructure projects, only to find themselves saddled with debt that they cannot repay.  They are then forced to renegotiate unfavorable terms that hinder their future development, and undermine their sovereignty.

We’ve seen countries agree to host commercial facilities only to see those gradually morph into military bases — without public debate or approval. That’s happened to varying degrees in Sri Lanka, the Maldives, and Djibouti.

That’s why it’s important for people to have the right and ability to review these deals to make sure everyone benefits and not just a few. Chinese investment can be beneficial, but these deals need scrutiny and close supervision to make sure the benefits go to the country, not the dealmakers.  Transparency is essential for defending sovereignty.

Most countries have fought long and hard to maintain their freedom, their independence — and would never allow their hard-won sovereignty to be sold to the highest bidder. I know that’s true here as it is in the United States.  We will continue to be a friend and a partner to the Cambodian people in maintaining their freedom and independence.

But Cambodian leaders must also demonstrate a commitment to these principles as well, including allowing the Cambodian people to have a voice in their country’s future. And Cambodia’s leaders must recognize the risks of relying on only one partner, and whether its people will accept that major change in the country’s orientation.

Cambodia should have a free and open public discussion on the major economic, political, and strategic changes that are happening rapidly in the country, without restrictions. Students, journalists, academics, and political leaders across the spectrum all must be a part of this debate so that all of Cambodia’s people will benefit, not just a few.

Once again, I applaud CICP for making this conference possible, and I’d like to thank all of you for your efforts to make this a success. We look forward a lively exchange of ideas and open discussion, and thank you again for the opportunity to be here.