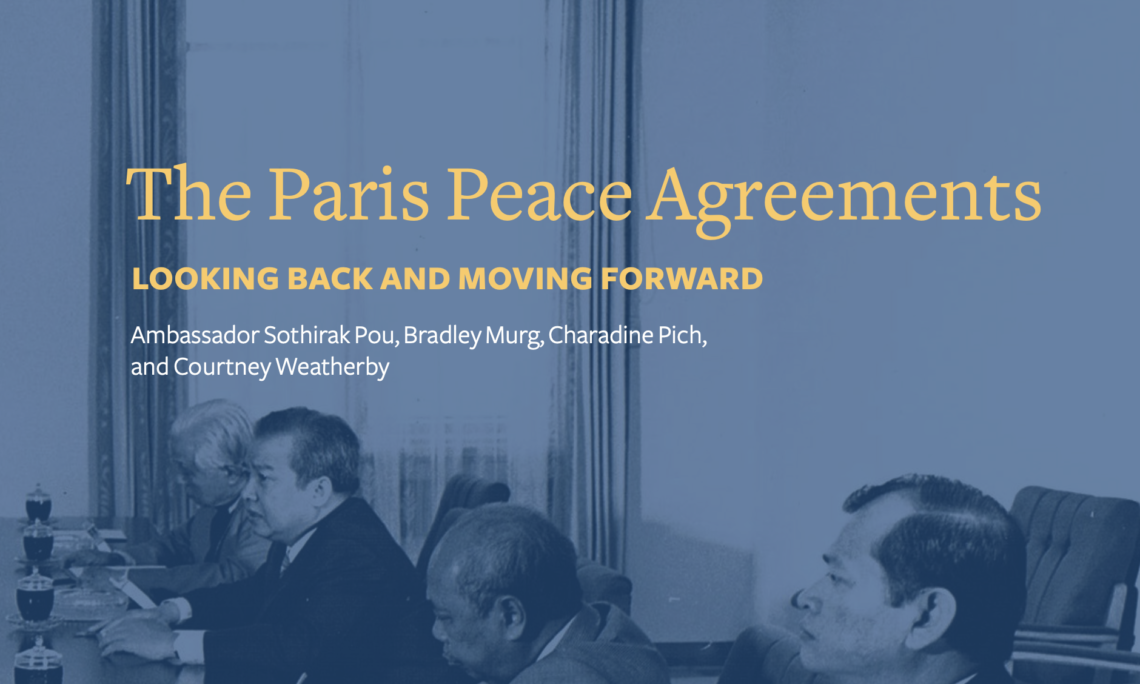 The Paris Peace Agreements brought an end to protracted conflict in Cambodia thirty years ago, and this report reviews their relevance today

The Paris Peace Agreements (PPAs) are a comprehensive political framework that brought together 19 different state actors and ended more than two decades of protracted conflict and internal strife that devastated Cambodia. They provided a normative framework for democracy that has been recognized in the Cambodian constitution and provided an opportunity to rebuild Cambodia into a modern county integrated into the global community and Association of Southeast Asian Nations. Many stakeholders view the PPAs as establishing a benchmark which has not yet been achieved and towards which Cambodians should continue to strive. Thirty years after the signing of the PPAs it is worth revisiting the way that the agreements were reached and the place that the PPAs have in Cambodia today.

Thirty years have passed since the signing of the 1991 Paris Peace Agreements (PPAs) and while the full history of the agreements has yet to be written and the historiography thereof continues to develop, the anniversary of their signing provides an important opportunity to examine how the PPAs took shape and their subsequent importance and value to the development of Cambodia.

The PPAs are a comprehensive political framework that brought together 19 different state actors and marked the end of more than two decades of protracted conflict and internal strife that devastated Cambodia. These have been considered watershed agreements, yet at the same time, scholars and analysts continue to maintain a diversity of views concerning the PPAs, their effects, and their role for the kingdom both today and in future. The Royal Government of Cambodia has indicated that their key values were integrated into the 1993 Constitution and PPA commemoration is no longer celebrated as a national holiday.1 Many civil society actors and other key stakeholders view the principles of political development envisioned in the PPAs as a benchmark which has not yet been achieved and towards which Cambodians should continue to strive.

Rather than wade into this ongoing debate (where considerable archival material remains inaccessible) and attempt to evaluate the PPAs against any particular set of metrics related to political or state development, this project seeks to gain insights from various key actors as to how the agreements were reached and thereby add to the historical record the insights of individuals from Cambodia and across the globe who were part of this unique process. There is a timeliness in revisiting and documenting the PPA negotiation process and their importance, as most citizens in Cambodia were either not yet alive or were very young at the time that the PPAs were signed. At the same time, also through targeted interviews, this study examines the place of the PPAs in Cambodia today, how they are perceived among youth, and their legacy in the kingdom in 2021.

Within the discipline of political science there exists a perpetual “tug-of-war” between structure and agency as the leading determinants of political outcomes. Some scholars place overwhelming weight on macrosocial variables and shifts in geopolitics while others underline the importance of individual actors and interests. The PPAs are no exception.

One could contend that the PPAs were inevitable as the Cold War came to a close and those conflicts that were inherently linked to US-Soviet rivalry lost their salience as the world shifted from an equilibrium of bipolarity to one of unipolarity. However, such a conclusion is not borne out by the comparative historical record. The post-Cold War period saw the outbreak of horrific violence in myriad states (e.g., the former Yugoslavia) where long-simmering tensions had been held in check by the unique structures of the long-standing bipolar system. At the same time, as states and governments transitioned away from communism and confronted the new realities of a unipolar world, fresh challenges arose, leading to prolonged “frozen conflicts” (as in Transnistria and Nagorno-Karabakh in the former USSR) and to state collapse and state failure in others (e.g., Somalia).

At the same time, one cannot ignore the impact of structure on the PPA process. As former U.S. Ambassador to Cambodia Kenneth M. Quinn commented:

“It must also be stressed that the collapse of the Soviet Union during this period of negotiation added a catalytic factor into the process and, perhaps, induced some delegations to accept some initiatives that they might otherwise resist. For example, the US side was very impressed by the ideas related to human rights that were proposed to us by Kassie Neou, a Cambodian refugee who himself had nearly been executed in a Khmer Rouge prison. The fall of the Soviet Union, had, in our view, instilled in several Communist parties in the region an enhanced need to withdraw from the Cambodian conflict. They thus did not oppose the US proposal to add human rights elements to the final document.”2

It is also possible to give too much weight to individual agency and fail to recognize that the ending of the Cold War fundamentally altered the incentive structures of both individual and state actors and served as a critical juncture providing fresh space for the negotiation and resolution of long-standing political challenges. This paper seeks to thread the structure versus agency needle by equally highlighting the importance of recognizing the causal weight of structural change (i.e., the end of the Cold War) and the significant role that state and, in many cases, individual agency played in bringing about the PPAs.

The PPAs were in no way “inevitable;” rather they were the outcome of lengthy and protracted dialogue and discussion among a wide range of actors over the course of more than a decade. The deep complexity of arriving at an agreement in light of (i) the large number of state actors involved and (ii) the strongly diverging interests of domestic political figures further underlines the view that the PPAs cannot simply be taken for granted as a natural outcome that occurred simply because a particular set of variables coincided at a particular time. Moreover, Cambodia’s history during the Cold War – famously albeit tragically termed a “Sideshow”3 in the title of William Shawcross’ text on Cambodian history – buttresses the case that Cambodia could have easily been left behind and left isolated absent the agency and actions of a range of catalytic historical figures. The potential alternative scenarios for Cambodia’s development are myriad and, in many cases, exceedingly grim, e.g., civil war.

Finally, while debate continues as to how effectively the agreements were implemented, hindsight is 20-20. It is essential to recognize the path-breaking nature of the PPAs. The establishment of the United Nations Transitional Authority for Cambodia (UNTAC) was the first attempt at multilateral state-building, one that would serve as a basis and key building block for future initiatives across the globe. Moreover, the active role played by the Association of Southeast Asian Nations (ASEAN) ultimately represented a key turning point in the evolution of this institution and its role in the region.

In the words of Michael Hayes, the co-founder, owner, and former publisher of the Phnom Penh Post, the Paris Peace Agreements “were instrumental in the ultimate and final demise of the genocidal Khmer Rouge in 1998; facilitating in 1992 the return of a quarter million refugees; and yielding international recognition of a new government resulting in the opening of Cambodia and the end of the country’s isolation.”4

Although thirty years have now passed, it is important for Cambodia as a nation as well as the broader global community to take advantage of the 30th anniversary of the PPAs to recall and re-examine how an internationally guaranteed comprehensive political settlement achieved the end of tragic conflict and bloodshed and helped rebuild Cambodia into a modern country which engages with the global community and is integrated into ASEAN. The legacy of the PPA, as stated by Ambassador Pou Sothirak: “is about an international arrangement that culminated not in military intervention, but a comprehensive political solution that resulted in national reconciliation and a Cambodia free from external domination.”