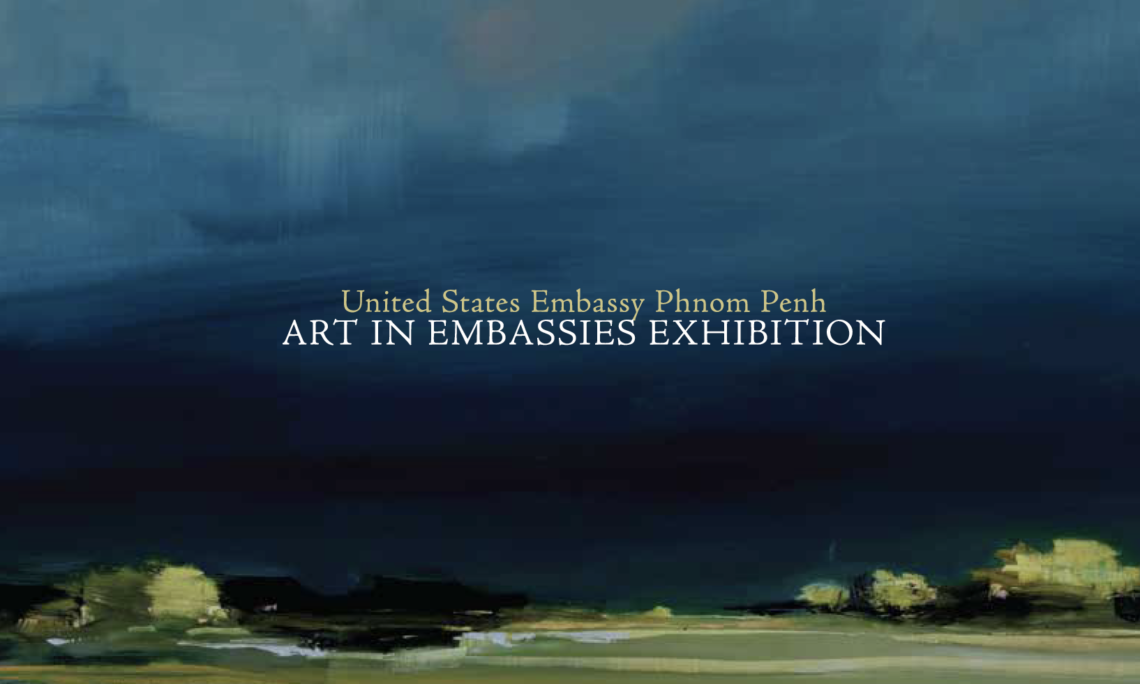 (PHNOM PENH, Cambodia) – U.S. Ambassador W. Patrick Murphy grew up in southern Vermont, and the artwork now hanging in his official residence in Cambodia reflects his deep ties to the Green Mountain State.

Murphy and his wife Kathleen Norman, a fellow New Englander, have organized an art exhibition at the official Ambassador’s Residence during his current tenure in Cambodia, featuring 14 paintings, textiles, and photographs that capture the rural landscapes and natural beauty of his home state.

The artwork came to Cambodia through the U.S. Department of State’s Art in Embassies program, which showcases America’s art to audiences around the world, in embassies, consulates, and official diplomatic residences.

“We hope the exhibition speaks to the Cambodian people,” Murphy writes in an Embassy catalogue introduction, “as the Kingdom’s agrarian traditions and emerald landscapes bear many resemblances to Vermont’s farming traditions and famous green mountains.”

All of the artists in the exhibition have a strong connection to Vermont, and the majority – Kate Emlen, Elizabeth Fram, Julia Jensen, Deborah Lazar, Paul Stone, and Bhakti Ziek – currently work and live in the state.  There is also a piece from the late German-American painter Wolf Kahn, who passed away earlier this year and had a farm in Brattleboro.

“We cannot overstate the generosity of the participating Vermont artists – packing up their precious works and sending them off to a distant land is a leap of faith,” Murphy said.

Another highlight in the exhibit is a lithograph by celebrated American folk artist Grandma Moses (Anna Mary Robertson).  The largest public collection of her works is in the Bennington Museum in Vermont, which Murphy visited on school trips as a boy.

Murphy attended Green Street, Canal Street, and Oak Grove elementary schools in Brattleboro; graduated from Brattleboro Union High School in 1981; and went to the University of Vermont, where he majored in political science and Canadian Studies, with a minor in French.  He was a Peace Corps volunteer in Cameroon and obtained a graduate degree in international relations from The Johns Hopkins University before joining the Foreign Service in 1992 as a career diplomat.

Today Murphy lives in Phnom Penh, in the U.S. Ambassador’s Residence, a historic building dating to the 1920s.  It was the home of the British Embassy in the 1960s and early ‘70s, but it was deserted during the traumatic years of the Khmer Rouge genocidal regime.  The United States began leasing the home in 1992 and purchased it in 1999.

“The works at the Residence remind us that art transcends geographical borders and connects us to our origins and roots,” Murphy writes.

For more on the Arts in Embassies program: https://art.state.gov/