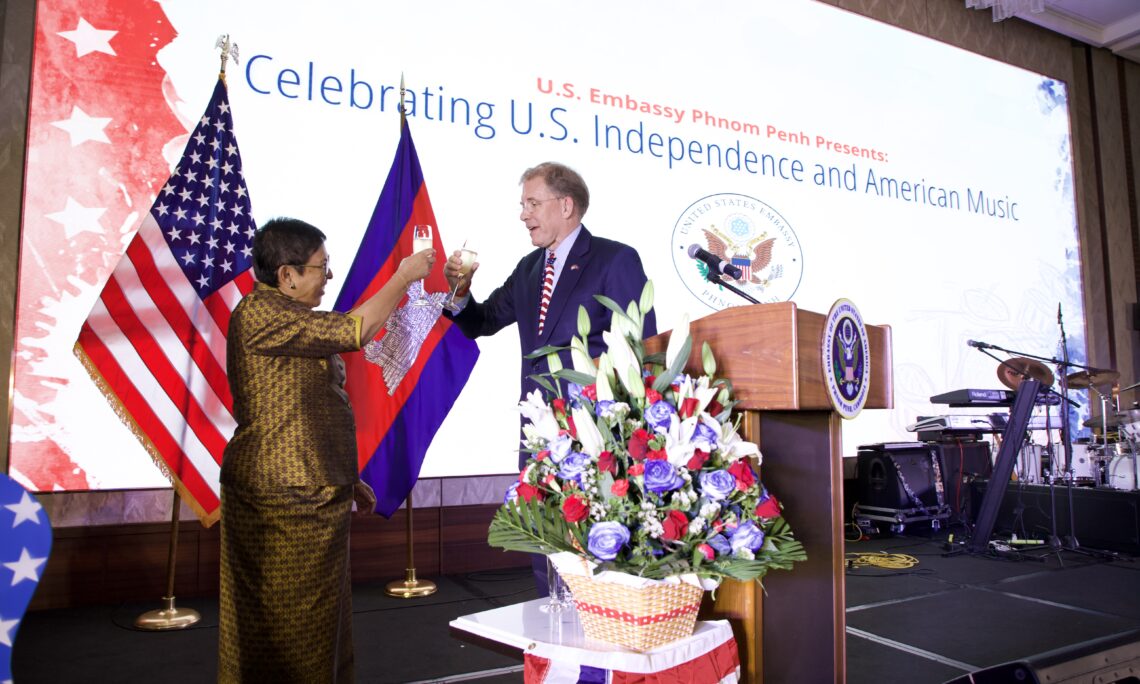 PHNOM PENH, Cambodia – U.S. Ambassador to Cambodia W. Patrick Murphy and Embassy staff welcomed over 400 guests to the Hyatt Regency hotel on June 30 to celebrate the 246th Independence Day of the United States of America.

Ambassador Murphy’s keynote address focused on America’s founding principles and democratic traditions – enshrined in the Declaration of Independence and Constitution – and the long, enduring relationship between the United States and the Cambodian people.

“Every Fourth of July, Americans celebrate who we are as a nation, our democratic values, and the ideals we hope to fulfill,” Ambassador Murphy said. “We also like to have fun on this holiday, and in that spirit our Independence Day event is a festive gathering of friends and partners.”

Minister of Culture Dr. Phoeurng Sackona also attended and gave remarks on behalf of the Royal Cambodian Government. Highlighting over 72 years of ties between the United States and Cambodia, she said, “The Royal Government of Cambodia looks forward to working more closely with the United States of America to explore new ways for a more vibrant relationship and partnership for the best interests of our two nations and peoples.”

The United States has been a strong and consistent development partner for Cambodia, providing more than $3 billion in assistance over the last 30 years. The United States is also Cambodia’s largest single export market, by far.

The United States will remain committed to the Cambodian people and their aspirations for a more prosperous, democratic, and independent country, where all voices are heard and respected.

The theme of the U.S. Embassy’s Fourth of July celebration was American music that has spanned the course of diplomatic relations between the United States and Cambodia.  Guests listened to top songs from distinctly American genres such as hip hop, blues, rock n’ roll, R&B, country, folk, and pop. The Embassy also honored Cambodia’s impressive musical legacy, including the songs of Sinn Sisamuth and Ros Sereysothea.